In 1991 our CEO and founder Larry Volwiler, was looking for a way to contain his Dalmatian, Duchess. Since traditional wood or chain link fences were not allowed in the neighborhood, the only options were a tie-out or an underground dog fence.

At that time the only underground fence option was the Invisible Fence brand. Unwilling to pay over $1,200.00 for an Invisible Fence, Larry was resigned to the fact that Duchess would have to be tied up.

Two problems quickly arose: Duchess would almost always get tangled around a tree and worse, from time to time, she would get off her chain and run away. Duchess was hit by a car on two occasions resulting in hundreds of dollars in vet bills.

At the vet's office after the second run in with a car the doctor mentioned that he thought another company was now offering underground dog fencing. Larry began his research and found the new company, Radio Systems Corp, now PetSafe.

Larry ordered a Radio Fence in September of 1991 and installed it in his yard. Total cost of the Radio Fence at the time was $600.00, half the cost of the Invisible Fence. 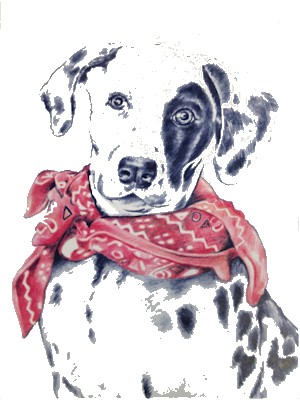 Duchess learned her boundaries quickly and an amazing thing happened! Within a few weeks, Duchess became a new dog. Before installing the Radio Fence, Duchess would go out on her tie-out and beg to come back in the house a few minutes later and run around like a maniac. Before long, she would beg to go out again and the whole process would repeat itself.

After the Radio Fence was installed, Duchess' personality changed. She would stay outside for hours on end. Sometimes she could be found sleeping in the sun on the back deck. She hung out in the front yard to greet the kids when they got off the school bus. More often than not, she was running around the yard playing. When she would finally come back in the house, Duchess was calm and content. What a change! Larry stated: "I would rather be without my dishwasher or microwave than my Radio Fence!"

It was at this point that Larry decided he needed to get involved in helping other people enjoy a happier, healthier dog. He contacted Radio Systems to see if he could become a dealer. Being a new company, Radio Systems was eager to find new dealers. In November of 1991, Larry started Radio Fence Distributors, Inc. By March of 1992, just four months later, after the Home and Garden Show in his hometown of Grand Rapids, Michigan Radio Fence Distributors, Inc. became profitable.

Over the next couple of years, Larry installed Radio Fences for customers all over Western Michigan and began setting up the PetSafe Professional Installing Dealer Network nationwide. On September 12, 1996 RadioFence.com became the first website offering PetSafe Pet Products to customers over the Internet.

Over the years, what started out as a home-based kitchen table business has provided expert advice to over 3.5 million people and their pets. It has been our pleasure and privilege to serve you these past 31 years.